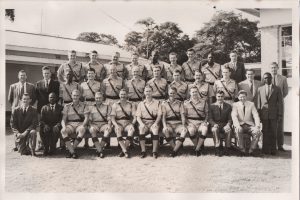 Senior Police Officers and Inspectorate of Chingola Police District February 1964. Chingola District comprised three stations, Central, Nchanga and Chiwempala, together with C.I.D., Special Branch and Traffic Sections and, directly under the C.O., Public Prosectors responsible for bringing cases to court and a staff officer for the Police Reserve.

The land which is now Zambia did not attract the attention of empire builders before Cecil Rhodes took an interest in the last decade of the Nineteenth Century. By 1900 it was administered under charter by his British South Africa Company in two separate parts, North-Eastern Rhodesia, with communications through British Central Africa (Malawi) and Barotseland/North-Western Rhodesia, with communications across the Zambezi, through Southern Rhodesia (Zimbabwe). In 1911 the two administrations were unified as Northern Rhodesia still under the Chartered Company under the supevision of the High Commissioner in South Africa. The two police forces, the North-Eastern Rhodesia Constabulary and the Barotse Native Police were amalgamated as the Northern Rhodesia Police (NRP), the development of which was held up by World War I, in which the greater part of the Force served as first line infantry in the defence of Northern Rhodesia and the conquest of German East Africa (mainland Tanzania).

In 1924 the Colonial Office assumed direct responsibility for the administration of Northern Rhodesia. The Town & District Police and Criminal Investigation Department of the NRP continued to grow and in 1932 the Military Wing of the Force was separated to become the Northern Rhodeisa Regiment. The development of Northern Rhodesia and its now entirely civil police force suffered as a result of the World recession of the 1930s and the vicissitudes of World War II and its aftermath. 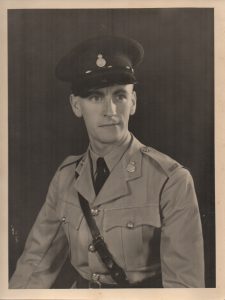 Roy Coppard joined the NRP in July 1949. This photograph was taken in Ndola in uniform of Assistant Inspector Grade II.

In 1953 the British Government included Northern Rhodesia with Southern Rhodesia and Nyasaland (Malawi) in a federation which was not welcomed by the African population. The NRP remained the responsibility of the Northern Rhodesia Government and, especially in the number of European officers expanded, and was organised and equipped as a modern police force. However by 1963 it was clear to the British Government that despite economic growth federation had failed to meet the aspirations of the majority population and it was abolished on 31 December that year. Following elections under universal suffrage, Northern Rhodesia, under its new majority government became the Republic of Zambia on 24 October 1964. Redundancies among European officers to allow for African advancement to the most senior ranks, the end of expatriate recruitment and resignations were already taking effect when the Northern Rhodesia Police ceased to exist and those still serving passed into the Zambia Police.

Among the redundant were Superintendent Brian Coase and Assistant Superintendent John Coates who some months later recognised each other on opposite platforms at the then Waterloo Junction railway station. This chance meeting of two men busy building new lives and careers led to the formation of the Northern Rhodesia Police Association to create and maintain a bond of comradeship between all those who served in the NRP in any capacity. 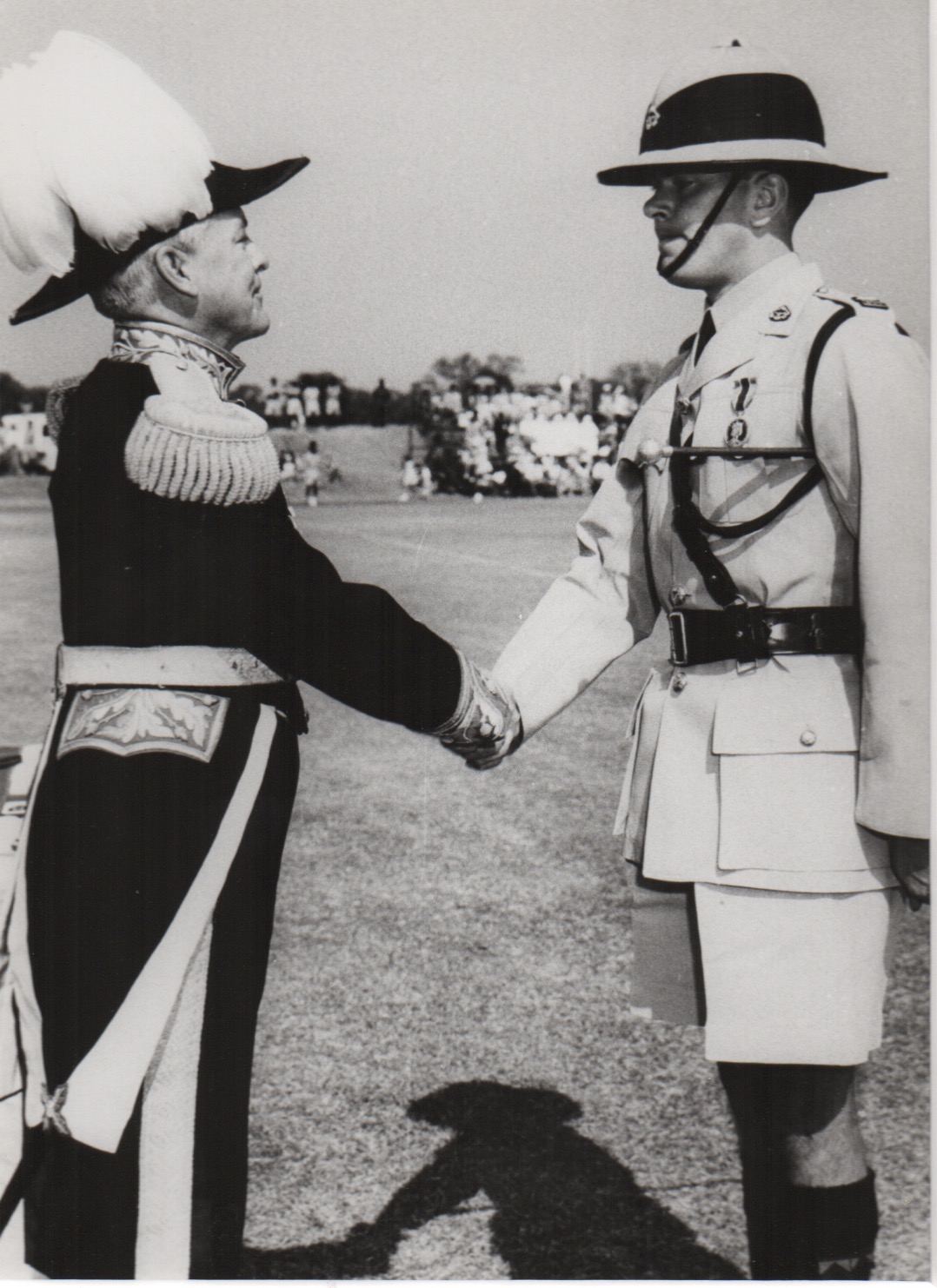 John Coates wrote to every ex-NRP officer in the UK whose address he knew inviting them to a meeting in London. This took place on Saturday 4 December 1965 at the King’s Arms, Kennington with Brian Coase who was elected Chairman, John Coates, Vice Chairman, John Daniels, Secretary, John Aylmer Coates, no relation, the first treasurer, Roy Coppard, Dickie Dixon and Chris Thorne. An inaugural general meeting was held at the Royal Commonwealth Society, Northumberland Avenue in April 1966 when a constitution was adopted and a council formally elected.

Few Europeans who remained with the Zambia Police could envisage a full career and stayed for more than few years so the number of persons in the UK and, indeed, all over the World eligible to join the NRPA grew rapidly though some chose to concentrate on a new life and career without what they saw as the distraction of nostalgia.

Meetings were held in London several times a year in addition to the Annual General Meeting and Dinner. In 1969 Colonel J P I fforde CBE KPM CPM(G), Commissioner of the Northern Rhodesia Police from 1951 until the end of 1962, was elected President. A South Africa Region had been formed with Trevor Wright as Secretary, later to be Chairman until his untimely death in 1985. In 1977 Kenilworth, due to its central location became the venue for the UK Region’s AGM, Annual Dinner and weekend reunion. Informal London meetings continued but after 1983 only once a year in December. For two years this was held at the Victory Ex-Services Club in conjunction with the British South Africa Police Regimental Association but after that independently at various London venues until 1991 when the then Vice Chairman, Ed Sharrod, an inspector in the Metropolitan Police, arranged for the Christmas Reunion to be held at New Scotland Yard, an arrangement which continued until the Met moved to new premises in 2016 when a successful reunion was held at the Union Jack Club.

In 1988 Brian Coase resigned as Chairman as he was moving to Spain on retirement from the Crown Prosecution Service. Paul Wheeler, a fellow solicitor, was elected in his place. In 1989 a total of 240 members and spouses, including many from South Africa and elsewhere, sat down to the annual dinner at Kenilworth, marking the 25th year since the independence of Zambia. Some 25 members from UK travelled to South Africa that October to attend the reunion of the South Africa Region held in Swaziland.

For the 1997 AGM and Spring Reunion it was decided that there was no longer a suitable venue at Kenilworth and Swindon was chosen, thereafter this event has been held at various places for one or a few years at a time. In 1998 Paul Wheeler stood down and Michael Mylod OBE, formerly Deputy Chief Constable of Hampshire and Deputy Commissioner of Police in Bermuda, was elected Chairman. It was resolved that the NRPA’s twice yearly newsletter should be named ‘Nkhwazi’ which had been the title of the magazine of the Northern Rhodesia Police. Nkhwazi, the fish eagle, flying over Victoria Falls had been adopted as the arms of Northern Rhodesia in 1924 and the badge of the Northern Rhodesia Police in 1932, and remained central to the badge of the NRPA and the Zambia Police.

As the Millenian approached more and more former officers of the NRP reached retirement age in their new careers. Many who had felt they lacked the time to be involved with the NRPA now joined. Increased in strength and with members with more time on their hands but still energetic, the NRPA perhaps reached its most active and productive decade. 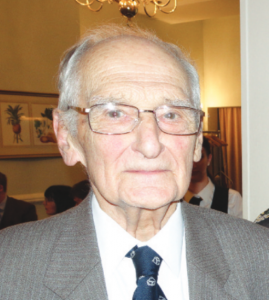 John Coates, again Vice Chairman, had recently visited Zambia, called on the Inspector-General of Police, Silas Ngangula, and been invited to take the salute at a passing out parade at the Police Training College, Lilayi. At John’s suggestion it was resolved that the NRPA in conjunction with the Northern Rhodesia Association should raise funds for the purchase of a landrover for use by Care for the Wild International in Kafue National Park. More than £9,000 was raised and NRG1 was handed over in 2000. All Northern Rhodesia government vehicles, including those of the NRP, had born the prefix NRG on their number plates. The NRPA contributed to various Zambian charities over the years and John Coates now launched an Education Grant Scheme for children of Zambia Police officers.

In 2001 Mike Mylod retired as Chairman to live in France. John Coates was unanimously elected as Chairman having served the NRPA tirelessly since its inception. Inspired by his reception by the Zambia Police, John set about organising Z04, an NRPA visit to Zambia in strength, which took place in 2004. This time the salute at Lilayi was taken by Paul Wheeler, who had served as an assistant commissioner of police in Zambia in the 1960s. John Coates had noticed that many of the instruments the Zambia Police Band had inherited in 1964 were now well past their best and had succesfully called on NRPA members to contribute replacements which were presented on this most successful visit which demonstrated that the old ‘bwanas’ were remembered with respect and affection.

In 2005 Shirley Schofield, who in 1993 had compiled and published ‘The Donas Remember’, reminiscences of officers’ wives, obtained a National Lottery Grant to create a digitised archive of more than 1,000 images of the NRP on and off duty. Colin Jennings and Don McLean kept all members online worldwide, informed of events, sadly mainly the deaths and funerals of old comrades and friends.

John Coates stood down in 2005 to be succeeded by Ken West. In 2006 a number of senior officers of the Zambia Police attended the Spring Reunion of the NRPA at Thame and the following year the Inspector-General, now Ephraim Mateyo, a very young constable of the NRP in 1964, was guest of honour.

In 2009 John Hambly succeeded Ken West as Chairman and in 2010 he stage managed the unveiling by Cynthia Coase, widow of Brian, of another of John Coates’ projects, the NRP memorial at the National Memorial Arboretum at Alrewas, Staffordshire. The 50th anniversary in 2014 saw a return to Alrewas for the dedication of two stone benches and a magnificent dinner at Moor Hall, Sutton Coldfield.

Over the years, in addition to the main Spring and Christmas reunions smaller local reunions had been held from time to time on the initiative of individual members. For many years a ‘Northern Reunion’ was held at Harrogate organised by Ralph Wardle.

In 2016 John Hambly stood down and Tim Wright, author of ‘the History of the Northern Rhodesia Police’ took his place. With thinning ranks the NRPA goes on but soon, like the NRP itself, it must pass into history.