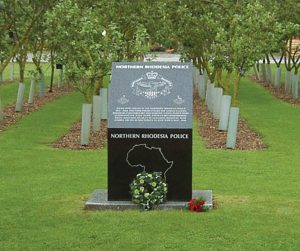 At the 44th Annual General Meeting at the Cheltenham Park Hotel on 8th May 2009 John Coates proposed the motion “To consider joining the growing number of Colonial Police Forces establishing their permanent service memorials at the Alrewas National Memorial Arboretum”. He explained that though the history of the NRP had been published, no memorial existed for those who had served and one should be established, particularly to honour those who were killed on duty and are mostly buried in Zambia, with final resting places too distant for most relatives to visit.
The National Memorial Arboretum at Alrewas, Staffordshire, must surely be the appropriate place for such a memorial. Besides the British police the Malayan, Hong Kong and Kenya forces already had memorials there and the BSAP were planning one. He proposed a special working party be formed to explore feasibility and funding for an NRP memorial. The meeting endorsed his proposals.

John had put on an exhibition of photographs of the NMA and had copies of the guide book available for perusal. This was very helpful as few members at that stage had previously heard much about the NMA and some were under the impression it was only for the armed forces. 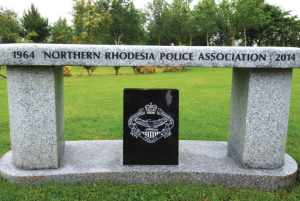 One of the granite benches revealed after their dedication

The Working Party was quickly formed consisting of Ralph Wardle, an NRPA Council member, John Coates, David Deptford, Don Maclean, Bert Cubitt and Tim Wright and soon met at Alrewas. After touring the site the Working Party met in the Far East Prisoners of War hut. It was initially considered that the best position might be in the area known as ‘The Beat’, containing a number of United Kingdom Police Service memorials, near which happened to be the memorial of the King’s African Rifles and East African Forces Association, which included the Northern Rhodesia Regiment. In the end ‘Colonial Corner’ which already contained the memorials to the Malayan Police and Royal Hong Police was preferred. The form of the memorial and an inscription were agreed.

The Working Party’s report was approved by the NRPA Council on 9 December 2009 and an appeal for donations was made in the Winter 2009/2010 edition of Nkhwazi. The target for the estimated cost of the memorial and a dedication ceremony to take place in the Summer of 2010, was put at £7,000. £2,000 had already been pledged by an anonymous donor, up to £1,000 by the South African Region and £1,000 had been allocated from UK Region funds made up of £750 from the sale of the medals of the late Chief Inspector R A Howe MSM, who served in the NRP from 1913 until 1934, and £250 from a legacy to the NRPA by the late Dot Davis, a great friend of the NRP both as a civilian employee and a police reservist.

Ron Cliborn-Dyer, terminally ill, had written “The NRP was something very special. Some of us may never see the Memorial but our children and grandchildren may and so may many people who have no idea what it was to be alive in Central Africa in those days.”

At the 45th AGM on 22nd May 2010, the Chairman, now John Hambly, was able to announce that work had been completed. The appeal had produced £9,700 including significant sums from non-members and £800 from the central funds of the South Africa region. The unveiling of the memorial and a service of dedication would take place on 2nd July at the National Memorial Arboretum. 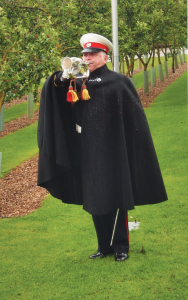 The Last Post sounded by a British Legion bugler

Between 140 and 150 persons were present at the unveiling, including Marriott Besa, editor of ‘UK Zambians’ and Daniel Mwamba, guests of John Coates. After an address of welcome by John Hambly, the service was conducted by the Reverend John Hawkins, son and grandson of distinguished NRP officers. After his call to remembrance and the hymn ‘Abide with me’, the memorial was unveiled by Cynthia Coase, widow of Brian, the first, and longest serving, chairman of the NRPA. After a few well chosen words from Cynthia, Rev Hawkins dedicated the memorial and NRPA Secretary, Chris Lyon read from Ecclesiastes 3 (verses 1-11). The Last Post was sounded by a British Legion bugler, followed by one minute’s silence and then Reveille. After a closing prayer and the singing of the National Anthem accompanied, thanks to the technical ingenuity of Don Maclean, the Band of the Northern Rhodesia Police, the assembly dispersed to the stirring notes of ‘Nkhwazi’, the march of the NRP recorded by the Band in 1963.

After lunch in a marquee John Hambly made a further speech of welcome and invited John Coates, as the mastermind of the project to say a few words. John Coates thanked all who had helped bring it to a successful and timely conclusion and expressed sorrow that Brian Coase had not lived to see the unveiling of the memorial of which he had been an enthusiastic supporter. John thanked Cynthia for performing the unveiling so well and said she had asked him to say that she had felt it a great honour to be asked to do it. The Chairman made presentations to John Hawkins, who agreed to become Honorary Chaplain to the NRPA, John Coates and Cynthia Coase.

The memorial is of black marble. On the front is written NORTHERN RHODESIA POLICE above an outline map of the African Continent with Zambia, the old Northern Rhodesia, shown up in copper. The top slopes back like a lectern, again with the title of the Force beneath which is the final badge of the NRP flanked by smaller representations of the pre-1932 crested crane badge above the inscription:-

TO ALL WHO SERVED IN THE NORTHERN RHODESIA POLICE 1911-1964 AND THEIR PREDECESSORS THE NORTH-EASTERN RHODESIA CONSTABULARY AND BAROTSE NATIVE POLICE WHO SUPPRESSED THE SLAVE TRADE PARTICULARLY REMEMBERING THOSE WHO DIED ON DUTY IN NORTHERN RHODESIA NOW ZAMBIA OR ON ACTIVE SERVICE IN EAST AFRICA 1914-1918.

At the AGM in 2012 it was announced that the NRPA Council had commissioned a pair of granite seats to complement the memorial and commemorate the first 50 years of the NRPA. The work would be done by the same firm that had made the memorial and the seats would be dedicated as part of the May 2014 reunion which was to be held at Sutton Coldfield. The estimated cost was £1600-1800 but the Chairman hoped to raise £2500 so that the cost of the dedication ceremony at the NMA would also be covered. Under the watchful eye of John Hambly the working party preparing for the whole weekend was led by Nigel Rugman and otherwise comprised Nighean Darlaston, Bob West and Jon Riches with assistance from Don and Shiela Maclean, David Williams and, of course, NRPA Secretary, Chris Lyon.

Members attended from Australia, South Africa, Zambia, Malawi, Namibia, Canada, Spain, Portugal, France, Ireland (North and South) and the Isle of Man as well as all parts of Great Britain. The benches were to be dedicated on the morning of Saturday 7th June 2014. Coaches arrived promptly to convey members from the Moor Hall Hotel at Sutton Coldfield to Alrewas.

Everything within the control of mortals worked perfectly and torrential rain failed to dampen the spirits of the 120 who assembled at the memorial site. The dedication was again conducted by the NRPA’s Honorary Chaplain, the Reverend Prebendary John Hawkins. NRP flags were stripped away to reveal the two handsome benches. The National Anthem was sung and the Last Post again sounded by the British Legion Bugler, before the assembly made its wet and muddy way to the marquee for lunch before returning to Moor Hall for the AGM and to round off a great, if tiring day, with the magnificent 50th Anniversary Dinner.